Since September 11, 2001 United States agencies involved with national security have become
increasingly concerned about the vulnerability of the North American power grid, water supply,
refining, nuclear facilities and railroads to electronic intrusions or ?cyber attacks?. Several
studies have been conducted and have identified changing socio-economic conditions that
increase the probability of such computer-based attacks. Increased domestic and international
terrorism, industry related issues affecting the utilities job market, the shift to more open
standards for interconnection of DCS and SCADA networks and a growing population of
computer-literate people with widely available hacker tools are factors that contribute greatly to
the likelihood of such threats.

In this paper, we will identify and discuss threat origins and how technologies available today
from GDC can mitigate these threats and be part of a comprehensive network design and security
policy to ensure safe and secure communications between components of DCS and SCADA
networks.

What is a DCS or SCADA network?

A SCADA network typically consists for a Central Monitoring System (CMS), contained at a
central plant for example and one or more Remote Stations. The CMS houses the Control Server
and the communications access via a peer-to-peer network. The CMS collects and logs
information gathered at the Remote Stations and generates necessary actions based on the
gathered data. A Remote Station consists of either a Remote Terminal Unit (RTU) or a
Programmable Logic Controller (PLC) which controls actuators and monitors sensors. Remote
Stations typically have the capability to be interfaced by field operators via laptops or other
handheld devices to perform diagnostics and repair operations. The communications network is
the medium for transmitting information between Remote Stations and the CMS. These facilities
can be telco lines, cable, or RF.

It is important to understand that DCS and SCADA based industries are undergoing a change in
how these networks are implemented. Controller networks typically were based on proprietary
serial cabling and/or fieldbus architectures (Fieldbus, Modbus, Profibus) which have upper data
limits of about 2Mbps, node limitations, and distance limitations which all varied from
technology to technology. This would all need to pass through a gateway to get to the internal IT
network  a very cumbersome approach. The development of Ethernet-capable controllers and
PLCs and the need for integration of other requirements (security devices, bar code scanners,
smart cards, etc) are helping to drive the industry towards more open and ubiquitous
architectures. This shift is also made apparent by the fact that many vendors are encapsulating
the bus protocols into TCP/IP: Modbus/TCP (Modbus protocol over TCP/IP, EtherNet/IP
(ControlNet/DeviceNet over TCP/IP), Fieldbus High-Speed Ethernet and ProfiNet (Profibus
over Ethenet). Ethernet is quickly becoming a larger part of DCS and SCADA network
implementations, in some cases replacing or augmenting the older bus-type architectures.

As demonstrated daily, any TCP/IP based network is subject to intrusion. These intrusions come
from numerous sources including:

Threats from within:
-- Company staff, technician, operators.
-- Security breaches may not be intentional, BUT?.
-- Emailed viruses

Security measures should not be taken lightly. Remember, if your network is easy for your IT Department to manage, it is most likely easy for an outside party to infiltrate.

How can GDC address security issues with DCS and SCADA networks?

GDC products should be part of a comprehensive secure network implementation. Other
elements that should be addressed are policies and enforcement, virus detection and prevention,
firewalls, and Intrusion Detection Systems (IDS). GDC?s line of secure modems and IP access
products can be the first line of defense at the most basic levels of your network ? OSI Layers 1
and 2.

As stated earlier, most legacy DCS/SCADA networks have modem access to some controllers
(and potentially elsewhere) for remote maintenance and troubleshooting. GDC?s family of V.34
modems with Steadfast Security and additionally RADIUS authentication can make these
connections ?hack-proof?. GDC?s Steadfast Security, which is a proprietary, handshake-based
exchange requires a GDC modem at both ends. If the handshake password exchange is not
completed properly, the call is dropped before ever being connected to the network. With a
common length password of 6-8 alphanumeric, it would be statistically impossible for any hacker
to gain access, assuming they have a GDC modem Additionally, adding RADIUS authentication
security where applicable would further enhance the security.

With the migration/augmentation of the DCS and SCADA peer-to-peer networks to 10/100
Ethernet, GDC?s line of IP access products, SpectraComm IP (SCIP) and SpectraComm
Ethernet switch (SCES) can provide first-line intrusion prevention. All of the SpectraComm IP
and Ethernet switch units implement GDC IronGate Security features. These features, including
port-based shutdown and MAC address filtering, can limit access only to authorized devices and
personnel as designated by the MAC Address tables configured in the unit by the network
administrator. It should be noted that a SCIP unit in LAN Extension (LAN-X) mode can not only
filter MAC addresses on the LAN, but can also filter on the WAN port as well to ensure that
unauthorized access does not occur from the circuit (Telco facilities). Additionally, the SCIP and
SCES implement industry-standard TACACS+ compatible clients for centralized authentication. 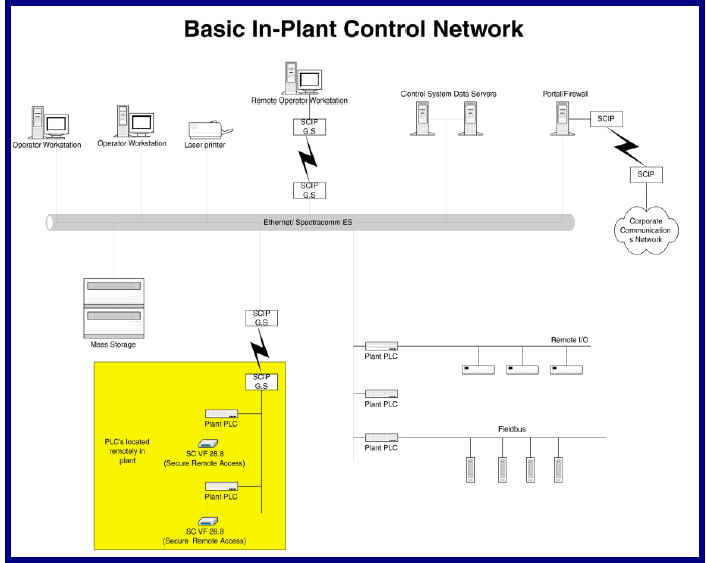 In large-scale processing facilities, the SCIP T1 (1.544 Mbps up to 5000 feet without repeaters) or
SCIP G.S (4 Mbps up to 7000 feet on 1 pair or up to 12,000 feet on 2 pair) in LAN Extension (LANX)
mode, can extend the reach between the Central and Distributed Controller well beyond the
100 meter reach of Ethernet alone. Implementing the MAC-based filtering and/or TACACS+ in
these situations allows maintenance personnel to attach to the network at the SCIP as determined
by the network administrator.

In SCADA RTU applications, the SCIP T1 in LAN-X mode and SCES offer a compelling and
secure solution where one might typically install a router with its associated costs. Implementing
the MAC-based filtering and/or TACACS+ allows only authorized maintenance personnel to
access the network via the SCIP/SCES as determined by the network administrator.
Additionally, the Contact Sense feature on the SCIP could be implemented to alert network
monitoring personnel of such things as door opening, high water, high heat, etc. at the Remote
Station if so desired.

SCIP and SCES have been independently tested and certified to stringent NEBS Level 3+
requirements for Telcos and additional testing have proven them to be consistent with the
classification as temperature ?hardened? (-40 o C to +70 o C) for deployment in extreme
environments. 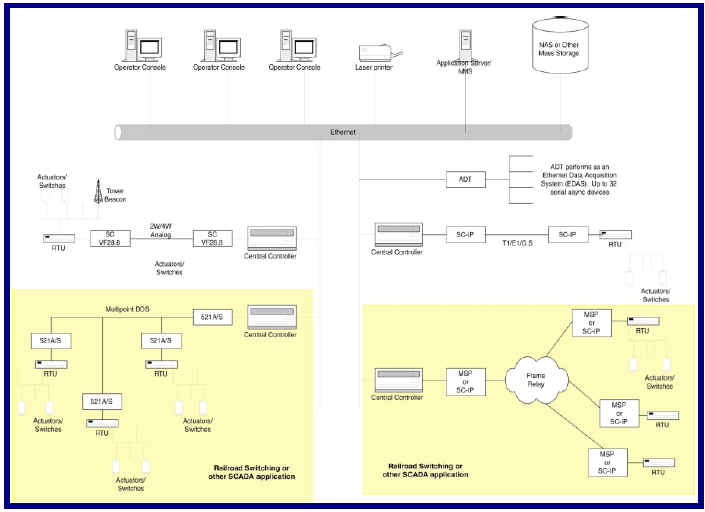 Conclusion
As has been shown, GDC offers a compelling and competitive solution for first-line defense and
intrusion prevention. The combination of Steadfast Security for dial connections and GDC
IronGate Security for Ethernet connectivity, address the most basic levels of secure networking
for DCS and SCADA applications as part of a comprehensive security policy.