The 3310 Mark II is a Video Conferencing Optical Extender (VCOE). It is designed to extend the distance between endpoints of video conferencing systems over fiber optic cable in a variety of applications. It is used for interconnecting CODEC equipment to the public switched network equipment or CODEC to CODEC.

The 3310 is equipped with two configurable data interfaces, two dialer interfaces, and two management interfaces.  The data interfaces are rate-agile in 56 kbps or 64 kbps increments up to 1.544 Mbps. The total available bandwidth of 1.544 Mbps may be entirely dedicated to a single data channel or divided equally between the two channels for up to 768 kbps per channel.  The dialer interfaces operate in the overhead channels of the composite signal and are used for applications utilizing dial-up circuits such as Switched 56 or BRI Services.

The user may perform setup and diagnostics locally by connecting a VT100 terminal or equivalent to the terminal port, or remotely via a dial-up modem connection to the modem port. Additionally, a 2x24 character backlit LCD on the front panel reports the status of power-on selftest, and provides a quick and easy way to setup, and diagnose the units using a set of pushbuttons.  Works with industry leading equipment from vendors such as PictureTel/Polycom, Tandburg, Adtran, VTEL and Madge. Used by some of the largest video conferencing centers in the country. 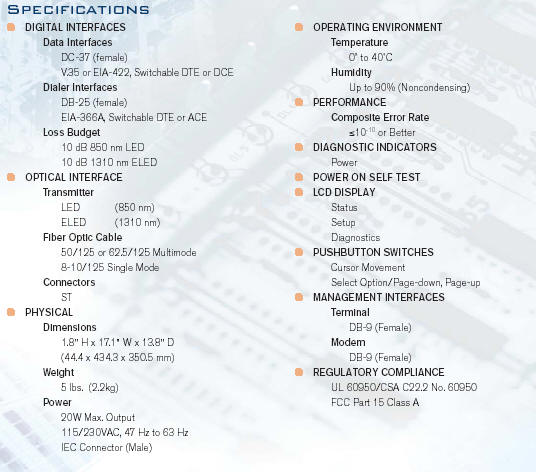